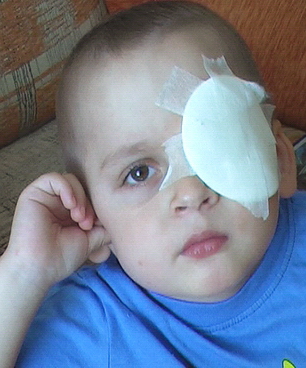 Gomel oblast, town of Kalinkovichi
Fundraising is over
Meet the child
Dear friends! Thank you for helping Zhenya. The boy suffers from bilateral retinoblastoma. He has recently had his left eye removed - the malignant tumour got beyond control. In order to save the remaining eye Zhenya has to undergo regular examination under anesthesia and get the emerging tumours "frozen". The procedure is called criodestruction. It is not performed in Belarus. We have raised 15 000 Euros. The amount will cover Zhenya's visits to Charite Clinic (Berlin, Germany) in the course of two years.

The video about Zhenya made by Tatiana ZHAKHOVSKAYA is a courtesy of ONT TV channel. It was shown on August 6, 2012.

We are the parents of a two-year-old boy, Zhenya. Our son was born in a two-parent family. He was our second child. Zhenya was born healthy. He came to this world in January 2010, when it was freezing cold. During the first moments of his life I was thinking: "What a robust, strong baby". And it was really so. The child was not prone to sickness. He caught colds sometimes and once even developed bronchitis. But all his ailments passed soon. By the age of 24 months he had been healthy, strong and ready to attend a daycare.

Our little Zhenya is a very happy and lively child. He loves being with other kids, browsing picture books, playing with his toys and knocking the ball about. We have always been celebrating our sons' birthdays in the company of both old and new friends. Everybody loves our Znenya. His little dream now is to be able to attend a daycare center along with other children.

The misfortune came unexpectedly. When Zhenya turned two I started noticing that his left eye reflected light in a somewhat weird way. But I didn't pay much attention to that. Now I understand I should have. Our ophtalmologist at once gave us a referral to an oncologist. Zhenya was diagnosed with retinoblastoma — a malignant tumour. After two cycles of chemotherapy the doctors offered to remove the eye. But we decided not to give up: the child was examined by German doctors and we resumed the chemotherapy. To the doctors' surprise the chemo led to good results: the tumour size was reduced. Now we are trying other treatments like krio-coagulation, laser coagulation and employment of beta-ray ofthalmic applicators. But all these things are too expensive for a Belarusian family.

We want you so hard to help us pay for Zhenya's treatment. There's still a chance to save his eye and his sight.

With gratitude and respect,

P. S.  The letter had been written and sent to the Foundation before the need for an urgent eye removal surgery arose. 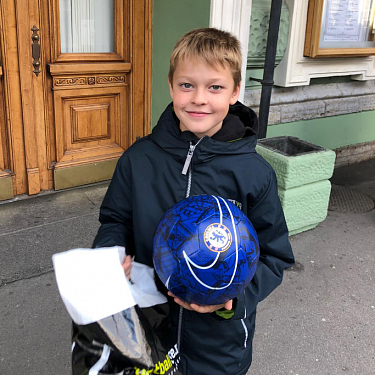