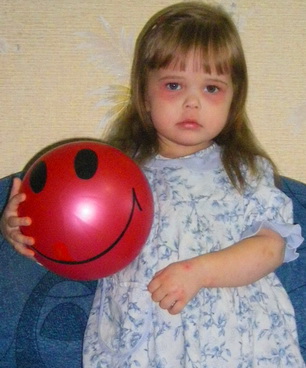 Mogilev
Fundraising is over
Meet the child
Dear friends! Thank you for your donations! Masha has a rare disease that makes her skin severely dry. The girl experiences much suffering and pain. Your contributions transform kids' lives!

My daughter is seven years old. Her name is Maria. At the age of six months she was diagnosed with atopic dermatitis, infantile form. At that time her skin was insignificantly affected. But with each year of Masha's life the state of her skin deteriorated though we followed all doctors' instructions — Masha was on hypoallergenic diet, we used moisturizes and hormonal lotions.

At 4 Masha's entire skin was affected. She was diagnosed with severe recurrent atopic dermatitis complicated by microbial eczema, neurodermatitis disseminata. Dysbiosis. Pancreopathy. Generalized lymphadenopathy. In 2010 Masha was given disability status. The same year in Minsk a blood test for immunoglobulin E  was performed: it was 434 while the normal level is 70. In 2011 the blood test was repeated: it was already 4 956. At the end of 2011 Masha was rushed to a resuscitation department — her skin looked like that of a crocodile, she had face edema, could not straighten her legs and walked in a half-bent manner. Severe chills accompanied all these symptoms. The chills lasted for two months. I cannot find words to describe the state my child was in. The doctors were not able to say anything definite. We insisted on being transferred to a Minsk clinic. Only in Minsk her condition became stable and the doctors set a diagnosis: primary immunodeficiency, hyperimmunoglobulin E syndrom. It is a very rare genetic disease that affects 1 in 1 million people. It is incurable.

We have not seen Masha with clear skin for the last three years. Her skin is always very dry, which causes weeping and severe itching, especially at night. Masha suffers from constant face and neck edema and hyperemia. Her skin needs to be constantly moisturized as due to extreme dryness it merely cracks and gets inflamed. In acute periods (and they are recurrent) Masha's skin gets dry in 30 minutes. Hardly do I finish moisturizing her arms when her legs are already dry again. In the morning Masha cannot get up because she is not able to straighten her legs untill they are moisturized with a lotion — and the effect lasts for only half an hour. Due to the severe night itching her bedding is stained with blood and strewn with chaff. When we cook something in the kitchen the smell makes Masha's eyelids swell — she cannot even open her eyes untill I put hormonal eye drops in. In the summer we go for a walk only in the evening since in the sun all Masha's uncovered body parts swell and grow scarlett.

Now Masha has been taking hormonal medications for four months already. I am not a doctor but I realize that it's no good and will affect her health in future. The doctors say that hormones are the only way to improve Masha's quality of life. Owing to the medications Masha gained a lot of weight, she started growing hair all over her body, often has backache, itching doesn't go away. But it is Masha's face that suffers most: it chaps, her eyelids grow red, the skin on the neck cracks and gets swollen. Now once a month we have to come to Minsk Center for Oncohematology for pulse therapy — it's a big dose of hormones over a short period of time.

Masha is getting older and she realizes that she is different from other kids. It's very hard to hear her saying: "Mom, I cannot stand it anymore, it would be better if I didn't exist". I always answer her: "Masha, you are sure to recover. You are the most beautiful, the most intelligent and patient girl". She doesn't go to school. We teach her at home. Masha learned to read at five and now she reads fluently. She can take dictations, solves math problems. Masha likes drawing, making handicrafts, doing children's crosswords. Masha prefers playing with toy trains and cars to playing with dolls. She likes playing children's billiard with her younger brother Vanya.

In winter, during her multiple hospital stays, she learned how to knit and embroider. Now she is embroidering a baby wolf picture. When it is somebody's birthday Masha always makes a greeting card herself and writes birthday wishes.

All of us love Masha very much. First of all we rely on God and we believe that medicine constantly develops and new medications for our Masha will be invented. And then Masha will lead a full life without suffering.