Flashmob "Code of Good" for the International Day of Charity 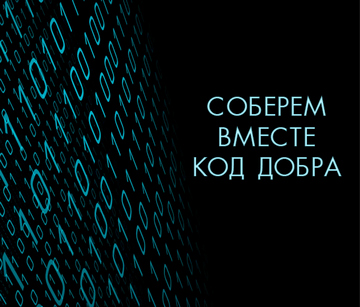 International Day of Charity, established by the resolution of the UN General Assembly on March 7, 2013, is celebrated annually on September 5. On this day, events are held all over the world to draw public attention to the activities of charitable organizations.

The Chance Foundation is launching the CODE GOOD flash mob from 5 to 15 September.

The purpose of the flash mob is to bring together help from different people by writing a unique "Code of Good"!

We are confident that thanks to the synergy of good hearts, we will be able to build a matrix of mutual assistance, woven from the smallest numbers in the number system: one and zero. By themselves, these numbers are negligible, but putting them side by side we can see an amazing picture in which 1 and 0 form seven-digit and even ten-digit sums !!!

Charity starts small, it starts with a desire to help! And if each person turns this desire into at least 1 ruble transferred to help those in need, we will receive a long chain of donations 1 + 1 + 1 + 1 + 1 + 1 + 1 + 1 ... which will eventually add up to a significant amount, into a real "Code of Good"! After all, even 1 ruble directed to charity makes us involved in the great and necessary cause of saving human lives!

Starting from September 5, within 10 days, we invite our partners, friends and friends of our friends to take part in the "KODBRA" flash mob, transferring donations from 1 ruble to the charitable account of the Chance Fund, consisting of ones and zeros: 10, 11, 101, 110, 111 ... Thus, we can generate our own, unique Code of good deeds from good hearts!

The conditions for participation in the flash mob are very simple:

1. Make a donation, which will include the numbers "1" and "0" in any variations ON THE SITE OF THE "CHANCE" FOUNDATION.

3. Mark at least one friend in the publication, and preferably 10  and be sure to have an account of the Chance Foundation.

Upon completion of the flash mob, we will summarize - we will write down our "Code of Good"!